From Debbie…
As a teacher and practitioner, I have long been attracted
to tuning forks and the healing power of sound.
But it wasn’t until I came across tuning forks that were especially calibrated
to the Ancient Solfeggio Scale that I knew that Sound Therapy
would become a vital part of my work.
I have always intuitively felt that these powerful and sacred frequencies
have the unique capability to facilitate quantum healing states,
holistic health and higher states of awareness.
As it turns out, my intuition was right…

“Divine Source wants this Sacred Knowledge
returned to the masses of spiritual people who long for it.
By returning to God’s clock, calendar, musical notes and color scheme,
humanity will return to the matrices of higher thought
that enables Spirit to inspire natural “communion.”
That is, people who sing the notes of the Solfeggio,
and practice the precepts therein, will be blessed with
peace, health, harmonious social relationships,
and Oneness with Spirit.”
~ From “Healing Codes for the Biological Apocalypse” – by Leonard G. Horowitz, D.M.D.

What is Sound Therapy? 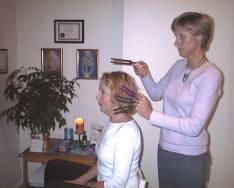 Sound therapy is the therapeutic application of sound frequencies to the physical body and energy field of a person with the intention of bringing them into a state of balance, harmony and health. ‘Harmony’ is defined as ‘congruity of parts to their whole or to one another’. ‘Health’ is defined as ‘the state of being bodily and mentally vigorous and free of disease’.

While the use of sound for healing is ancient and is found in many spiritual and sacred traditions, it is a relatively new modality in the modern complementary healing arts.

Our body and all its parts are a wondrous orchestra that is playing a beautiful symphony when we are balanced and healthy. However, if one player in the orchestra begins to play out of tune, playing the wrong notes with the wrong timing, pretty soon that begins to affect the whole orchestra. This is what happens in the body when one part of the body is not in harmony.

Every organ, every bone, every cell in the body has its own resonant frequency. Together they make up a composite frequency like the instruments of an orchestra. When one organ in the body is out of tune it will affect the whole body. The principle of entrainment states that powerful rhythmic vibrations from one source will cause the less powerful vibrations of another source to lock into the vibration of the first source. It takes less energy to pulse in co-operation that in opposition. The premise of Sound Therapy is to simply re-frequence the out of tune cell or organ, or the entire body and energy field.

Tuning Forks can produce the most remarkable experiences for many people…
As the nervous system comes into alignment,
frequently the body and energy fields will also follow this,
repatterning with the sacred ratio of the tuning forks…
Remember that they are powerful, sacred implements that can be utilized
as extraordinary tools for self-healing and transformation.
~ Jonathan Goldman ~ Acclaimed Author of “Healing Sounds”
President of “Spirit Music” and director of the “Sound Healers Association”

Intent plus frequency = healing. When these two factors are combined with the practitioner’s highly developed intuitionand total presence, profound transformation is possible.

“Pure INTENT is powerful.
It drives everything in front of it when it’s put into play”. ~ Kryon

“The moment of truth, is an act of INTUITION” ~ Arthur Koestler

“It is a mark of soulfulness to be PRESENT in the here and now.
When we are PRESENT, we are not fabricating inner movies.
We are seeing what is before us.” ~ John Bradshaw

According to the documentation and analyses provided in “Healing Codes for the Biological Apocalypse” principal investigator Dr. Joseph Puleo was intuitively guided to find the pattern of six repeating codes in the Book of Numbers, Chapter 7, verses 12 through 83. When deciphered using the ancient Pythagorean method of reducing the verse numbers to their single digit integers, the codes revealed a series of six electromagnetic sound frequencies that correspond to the six missing tones of the ancient Solfeggio scale.

“It is important to realize Solfeggio is not music, as we know music.
Solfeggio Frequencies are vibrational links filling
the blind spots of consciousness
so illusion can not enter” ~ David Hulse, D.D.

These original sound frequencies were apparently used in the great hymn to St. John the Baptist that, along with many Gregorian chants, were “lost” centuries ago according to church officials. The chants and their special tones were believed to impart special spiritual blessings when sung in harmony.

The Ancient Solfeggio Scale had originally been given to the church for a very spiritual purpose. When people sang these musical tones it was very powerful, cutting through all of the limited thought forms to access insights beyond belief systems.  Not surprisingly, because the tones facilitated vibrational healing states and higher awareness in the masses who sang them, the Church eventually suppressed their use.

Dr. Puleo, a naturopathic physician and minister of the gospel, and lead author Dr. Leonard Horowitz – who holds a masters degree in public health from Harvard University – spent three years researching the six tones that physicists and musicians alike recognize as “an extremely unique interrelated series of mathematical and electromagnetic sound frequencies”. Additionally, the entire series appears to relate to the “144,000” predicted in the Book of Revelation to be gathered by God to sing a special song heralding the Messianic age.

The Six Solfeggio Frequencies are:

Each Solfeggio frequency can be reduced by the Pythagorean method to 3, 6 or 9.

“If you only knew the magnificence of the 3, 6 and 9
then you would have a key to the universe” ~ Nicola Tesla

The first note, “UT-quent laxis,” is defined in Webster’s Dictionary as “the Gamut of dramatic emotion from grief to joy,” and “the whole series of recognized musical notes.” It has a frequency of 396 cycles per second, and is also associated with a “magnetic field strength equal to 105 power gauss,” or 100,000. The second tone, “RE“, short for “resonare fibris” or resonance, also correlates mathematically to 144,000. The third note, frequency 528, relates to the note “MI” on the scale and derives from the phrase “MI-ra gestorum” in Latin meaning “miracle.” Stunningly, this is the exact frequency used by genetic biochemists to repair damaged DNA, the genetic blueprint upon which life is based.

What is a Sound Therapy Session?

All of our life experiences are stored as energy patterns in our energy anatomy.  Some of these experiences, especially unresolved ones, create blockages interrupting the free flow of energy in our lives. When energy flows freely, new choices in our lives are awakened and we have the energy to make the changes we want to make… and perhaps need to make.

Sessions begin with a statement of intent and use of the “OM” tuner (calibrated to the vibration of the Earth) for grounding and to set a resonance of openness for the session.

The session continues using the Solfeggio Energy Tuners to open and balance the energy centers thereby raising the energy level from survival to optimum vitality. As we increase consciousness (the very reason we are here in physical form), it becomes necessary for energy to flow freely allowing the space for higher vibration energies to integrate. Each time we receive a vibrational tuning using the Solfeggio frequencies, it assists our bodies to adjust to and integrate the higher vibrations that accompany a raised consciousness.

For further information
or to schedule a private or distance session,
contact Debbie Morris M.N.F.H.

If you’re interested in the healing professions
and would like to learn more about this valuable modality
we highly recommend the following resource:
www.somaenergetics.com