From illusion to sovereignty & freedom

Illusion: n 1 an erroneous perception of reality.
2 a false or misleading perception or belief; delusion.
3 a false conception not in accord with the facts.

Freedom: n 1 personal liberty, as from enslavement, serfdom, etc.
2 liberation, as from confinement or bondage.
3 autonomy, self-government, or independence.
4 the liberty to order one’s own actions.

The student eyed the teacher critically. “What if I moved into this New Energy and didn’t like it there… I mean, could I then go back to where I was before, back to duality?”

“No you couldn’t,” the teacher said quickly. Then he paused. “Of course, you could always go back and play in the sandbox of duality if and when you wanted to. Indeed, all of us New Energy teachers do that from time to time. It can even be a lot of fun – in small doses. But no, you could never again go back to your old duality self.”

The student frowned. “I don’t understand that at all. Why couldn’t I go back to duality if I wanted to?”

“Because you would have grown too big and become too real to fit back into that small old world,” replied the teacher. “You see, you would then have a whole new consciousness, a consciousness that is beyond duality’s illusion of separation, limitation and polarity, even space and time. You would then be operating at a very high vibration and a new level of awareness. You would also then be completely free of duality’s karmic cycle – group karma, your own event-driven karma and your ancestral karma. You would no longer be chained to others via lessons. You would also have a whole new understanding of love and compassion – and integrity. In fact, you would have become a whole new person with a whole new life and a whole new freedom. Going back to your old duality self would be like a butterfly going back to being a caterpillar – impossible.”

There was a long silence. “Yes, it would be rather difficult, wouldn’t it… for the butterfly, I mean?”

“Well, it’s not that I want illusion or limitation,” said the student. “God knows, I’ve got enough of that already. No, it’s just that I don’t know what’s really in store for me in this New Energy.”

“Yes, but you didn’t mention the negatives. There must be some negatives.”

“No there isn’t,” said the teacher. “There’s a huge amount of challenge and learning, and especially during the transitional period – the metamorphosis, but they are not negatives. Ignorance, illusion and karmic lessons are your negatives, and they are all residents of duality, not the New Energy.”

His journey had begun. 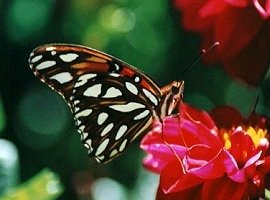