Welcome to Good Heavens page 2. We trust you’ll also find the following Q&As both interesting and informative. There’s even a list of questions with just a yes or no answer (which you’ll never get from a politician). And there’s also a few questions for you the viewer to answer.

Q. What about some more photos from your physical heyday.
A. I have hardly any unfortunately. It never really occurred to me to have lots of photos taken at the time. However, here’s an old B&W photo (or half an old photo anyway) that’s been sitting in my desk drawer for decades. Before you judge, keep in mind there were no anabolic steroids in those days – at least we never knew about them – and no super-advanced nutritional supplements, so it was all completely ‘au natural’.
I often wonder what I would have looked like if I’d been on roids (but so glad I wasn’t). Who knows, I may have even given the Incredible Hulk a run for his money. 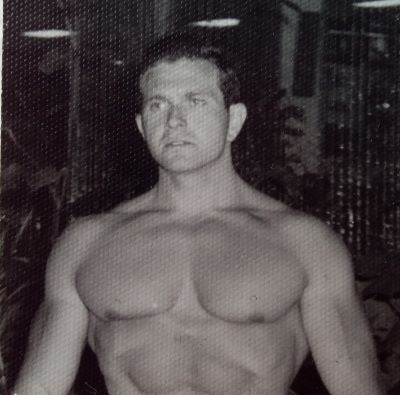 Q. Allen, do you mind telling me where all the questions on your site come from?
A. I don’t mind at all. From nearly 30 years of courses and workshops, lightworker meetings, my personal counselling practice in the Sydney CBD and a seemingly endless stream of email questions from visitors to our website… so many in fact, and with every one deserving of my care and attention, it left little time for anything else. Sadly, because of this, I had no choice but to eventually put a stop to them.
.
But as you can see, I haven’t forgotten them. They’re still somewhere in my head and my heart.

Q. This might be difficult as there must be a zillion books of this type out there, but is there just one that comes to mind that you would recommend I buy for a friend that shows – even if it’s in the form of an allegory – how it all truly works from a metaphysical/spiritual point of view? I don’t want anything religious and I don’t want fluffy new age and I don’t want anything overly zealous or unnecessarily complicated. I just want to give my friend the homespun truth – for want of a better way of describing it.A. Yes, there is just one that comes to mind. Jonathan Livingston Seagull (including the rediscovered Part Four) by Richard Bach.

Q. Have you ever suffered from depression?
A. Yes I have, but thankfully not the duality-based “clinical” depression. What I’ve experienced is what we call “Spiritual” depression, which is one of the notorious awakening / ascension symptoms.

We have a page on the website devoted to this subject called “Rhapsody in Blue”. Here’s an excerpt…

“Spiritual depression is still very much intrinsic to the awakening or ascension process. It is really not possible to change from one reality system to another, to go through a true and complete and indeed unprecedented spiritual transformation from a duality-based human to a New Energy Divine human, without experiencing at least some of the now infamous ‘awakening symptoms’… and especially spiritual depression.”

Regarding “clinical” depression, back in 2006 the former Reserve Bank of Australia governor told an audience of financiers:
“That [clinical] depression should be such a widespread problem in a period of such apparent affluence reminds us, of course, that there ismuch more to life than the mere material. The entire point of economic activity is to provide the basics, to lift everyone’s standard of living, and to provide the resources we need to indulge those “ultimately more valuable” non-material pursuits that provide meaning, happiness and health.”
He was saying of course that there’s more to life than stressing one’s self trying to keep up with the Joneses – referring to the comparison to one’s friend or neighbour as a benchmark for social class or the accumulation of money and material goods – which can lead even the seemingly most balanced person, if they’re not careful, down the path to depression.

As you can see, the two types of depression, “spiritual” and “clinical” are unrelated and have vastly different origins.

Q. All of us on the New Energy path know that reincarnation is a fact… whether one believes it is or not. So Allen, what do you feel your next life here could be largely about? Would it be continuing on with the lightworking and New Energy teaching or could it be something entirely different?
A. Neither, because I’m not coming back. Although I don’t know exactly what I’ll be doing or where I’ll be doing it, I know that it won’t be here. And how do I know that? The same way that you know you’re in love. You simply know. This is validated whenever a channelled entity like Kryon says at a seminar… “For some of you this is your last lifetime on earth, and you know it”. I always tear up after hearing that, and for me a flood of tears is my way of ‘knowing’ that I have just heard the truth.

Q. When you use the word ‘lightworker’ or talk about ‘shining the light’, what do you actually mean by ‘light’? I must admit when Kryon uses the analogy of the Lighthouse to describe the work of Lightworkers, I get even more confused.
A. The ‘Light’ is the Light of consciousness; the energy created as a result of high consciousness, or high vibrations of consciousness. The Lighthouse metaphor is used because of the ‘illumination’ commonality. What the lighthouse and the lightworker also have in common when shining the light is… a silent honour and respect for the free choice of each human. Lightworking is not crusading and it is not proselytizing. It is not evangelism. It’s far grander and it’s far more powerful than all that.

Q. It was quite a few years ago now, but I clearly remember seeing somewhere on your site a list of questions all of which had just a yes or no answer. I absolutely loved your simplicity with this. Could you do some more?
A. I’ll meet you half way. Seeing as you enjoyed those particular Q&As, and seeing that quite a few years have now passed, I’ll give you a good handful from that original (and perennial) list. But I’ll also throw in a couple of new ones… when they come to me. I’ve had so many questions thrown at me over the years that it may take a while to recall them.
.
Q. Is there any form of punishment (by God) after death for wrong-doing or what the church calls sin?
A. No.
.
Q. Do you think that God sits in judgement of us humans? Do you think that God cares if we do good or bad things?
A. No (and No).
.
Q. Do you think that people who pray in the traditional religious way (beseech/supplicate) are ultimately talking to themselves?
A. Yes.
.
Q. Can enlightenment actually be ‘transferred’ from a guru to a follower or devotee?
A. No.
.
Q. Do you think we will end up destroying each other and the world with nuclear weapons?
A. No.
.
Q. Is it wrong to love someone of the same sex?
A. No.
.
Q. Can great (classical) music heal?
A. Yes.
.
Q. Can certain music like heavy metal be damaging to us in any way?
A. Yes.
.
Q. On our journey from duality to Oneness, do we reach a stage where we lose our individuality or sense of self?
A. No.
.
Q. Do you think that we’ll see world-wide religious accord within our lifetime?
A. No.
.
Q. There is now conclusive evidence that the catholic hierarchy covered up child sexual abuse and moved abusive priests to other parishes where sexual abuse, at times severe and sustained, continued on unabated for years. Is it possible to imagine anything more heinous and heartbreaking?
A. No.
…
Q. Can one become enlightened, or reach this new ‘ascension status’ without ever doing traditional meditation or any of the various spiritual practices that fill the New Age magazines and expos?
A. Yes.
.
Q. Can reading the right books help us to grow in awareness?
A. Yes.
.
Q. Do you believe there’s such a thing as an evil spirit or force, or an objective evil power (like Satan) that is contrary to God?
A. No.
.
Q. I can’t tell you how many books and channels I’ve read over the years, not to mention all the pricey courses and seminars, yet sometimes I can’t help but wonder… ‘Is this just all crap or what?’ Do you think it’s wrong of me to think like that?
A. No.
.
Q. Of the entire crop of current world leaders, are there any in your opinion who are truly enlightened, or rather, New Energy enlightened?
A. No.

Q. I’ve always struggled with my excess weight until I finally came to realize that my overweight problem was actually emotionally based and not a physical or diet thing. Do you believe that emotional issues account for a lot of overweight problems?
A. Yes.

A. Apparently not. As Kryon has said… ‘Not long ago, if you wanted to communicate to someone far away, you sent a letter. It was carried by a horse. It took a month to get a response. Now you communicate instantly!’

If someone a hundred years ago had said that we would soon be communicating instantly, you would have thought they were mad… would you not? In fact, you would have thought they were mad about a whole lot of things that we simply take for granted today. Remember, as we are now in the New Energy, we need to prepare ourselves for the previously impossible. In a very few lifetimes we’ll be able to wish ourselves anywhere, because as Kryon has said, in the quantum age we’ll be entangled with everything. No more lift-offs into space in super-expensive metal cans… which in the cosmic scheme of things, take us almost nowhere. The Pleiadians must be laughing their heads off.