By the Wayside
(New EVERY week)

The Wayside Chapel in Sydney’s infamous Kings Cross is a unique and special place. Serving the needs of 2000 young, elderly, frightened and displaced people each week, it remains a place of unconditional love, acceptance and support for the lost, lonely, homeless, abused and dispossessed.

Established over 40 years ago by the Reverend Ted Noffs, the Wayside quickly became known for its emphasis on self help recovery, and encouragement for all to speak and act on social issues. It is a sacred place for people of all faiths and of none, where the human journey of the whole family of humanity is celebrated and all creation loved and respected.

Graham Long is now the Pastor at the Wayside, and with his vast and valuable experience as a social worker, a prison chaplain, a child protection advocate and a welfare agency founder (and his intolerance for misguided religious extremists), there is simply no better or more qualified person for this job. It is an honour for us to include Graham’s weekly Inner Circle Newsletter on the Points of Power website.

The Wayside is always looking for volunteers for their Crisis Centre, Cafe, Op Shop and their Street Outreach Team. If you reside in Sydney and have a few hours a week to spare and would like to help with this great work, they would love to hear from you.

The greatest lesson I’ve learned over these years is that love is everywhere to be found and everywhere in need of me. Just now there seems to be so many people suffering from major mental health issues. There are always people around Wayside talking to themselves or having arguments with people who are not present, but just lately I’ve noticed that the numbers have increased and the needs are overwhelming. This morning as I approached the building, I saw a vaguely familiar face that clearly recognised me and made a direct beeline for me. As we approached each other I recognised someone that I’d not seen for a while. A couple of years ago, the young bloke had a full set of teeth and today, not a single tooth in his head remained. It was a happy reunion with a broad, gummy smile. “Hey Rev, I’ve figured out all this stuff about Jesus. I know why he was popular and why they killed him.” We were off to a good start. “I’ve calculated it all mathematically, but I’m going to have to do it all again because I’d forgotten that 1982 was a leap year.” “Oh” I said as if I could see the relevance. In just a few minutes he descended into total incoherence. He excused himself because he had to find a quiet place to do some more calculations. I loved that we had a connection of sorts, even though our words carried no meaning to me at all.

The sight of one other fellow who appeared this week, caused me to catch my breath. We’d not seen him for perhaps seven or eight years. To look at, this guy is a cross between a garden gnome and a raging bull and you can never be sure which form you’re about to encounter. When we last saw him, he was a danger to himself and everyone around him. I’d mostly encountered him while he was in a florid psychosis and his ravings, ignored by all around him were, if you listened, the most heart-breaking collection of tormented statements that could ever be heard. I came to the conclusion that years ago he must have been dreadfully abused by perhaps his mother or some other significant figure in his childhood. It broke my heart to hear him and we did our best to get him appropriate treatment but at a critical moment, he simply vanished. Today he has a different name to seven years ago and I greeted him like a long, lost friend. He’s still unwell, but at least now the nasty spitting of abuse is missing. He’d not seen our new building so I offered to show him around. I introduced him to various staff as if he was a guest of honour and I’m pleased to tell you that they each, in turn, treated him in the same way. When we got to the garden on the roof, this dear man was blown away. He kept saying, “Wow, this has come up good” and “You’ve done such a great job Graham”. Considering that I’d almost never heard a coherent sentence from this bloke, I was blown away by his genuine appreciation of just how far we’ve come since the old Wayside building had been developed.

Another lesson love has taught me is to see not just what was, but what is becoming. I have a thirteen-year-old granddaughter who wears the face of her father. I adore her. I melt every time she walks into a room. I’d hand my credit cards over if she asked. I’ve caught myself wanting to love the little two-month-old baby that I used to walk around the block, explaining what trees were and how the sky sometimes has clouds and other times is clear. Such precious memories and yet this girl is now thirteen. She’s becoming a young adult. She has her own mobile phone. She’s no baby and being babied by her grandfather is no compliment. She reminds me that it’s is not all about me. This girl is becoming herself, more lovely than I could have imagined. I need to listen and speak with the one who is fast becoming, complete with fashion sense and a mobile in her back pocket.

Thanks for being part of our inner circle, 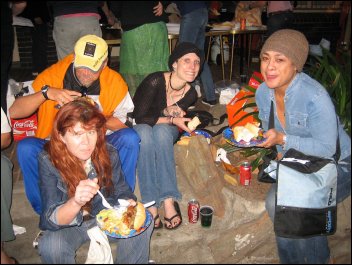 Free barbecue for the homeless.
Thank God for the Wayside.